The Vanilla Islands of the Indian Ocean looked at low-carbon and sustainable future as a region when they met Geoffrey Lipman of ICTP & SUN Project for Green Growth.

The Vanilla Islands of the Indian Ocean looked at low-carbon and sustainable future as a region when they met Geoffrey Lipman of ICTP & SUN Project for Green Growth.

Representatives of the Vanilla Islands met at the Seychelles Pavilion at ITB to plan the future collaboration for their member states in this unique tropical paradise destination.

The meeting was hosted by Minister Alain St.Ange (Seychelles) and also attended by Minister Duval the Deputy Prime Minister & Tourism Minister of Mauritius, as well as Vola Raveloson (Madagascar) and Michel Ahamed (Mayotte). Pascal Viroleau, the CEO of the Vanilla Islands, was also present for this meeting that took place on the sidelines of ITB 2015 in Berlin. 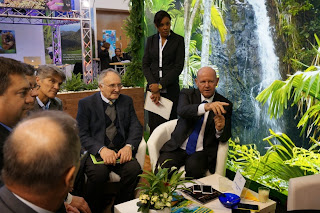 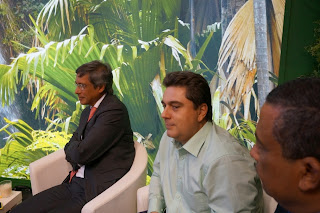 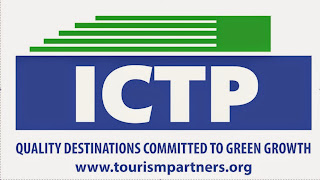 A key point of discussion was how the Vanilla Island Travel & Tourism community could play a leadership role in the coming transformation to a low-carbon, sustainable future, and how to start this long-term shift in 2015, which will see heads of state summits on development financing, sustainable development goals, and most importantly carbon reduction targets in Paris in December.

The representatives held discussions with a group brought together by its special advisor on Green Growth, Professor Geoffrey Lipman, President of the International Coalition of Tourism Partners (ICTP), around the “SUN Project” for Green Growth – including the CEO of Civic Resources (US) – a global connectivity platform linking smart communities, and the CEO of SunArk, a constructor of prefabricated solar-powered buildings designed for small island and developing country renewable energy transformation.

Lipman described the “SUN Project” as a 3-step framework for continuous transformation – supporting growth of travel for jobs and wealth creation but with green built into its core for sustainability. This would be achieved by:

• Civic Resource Platform connection to major global and local Green Growth-focused databases of trends, targets, innovations, and the like. This platform will also link with national e.government structures in the Azure cloud space.

He said that the group had embarked on a plan to raise financing from public and private sources supporting low-carbon adaptation and climate resilience.

The representatives wholly endorsed this concept for Green Growth transformation and agreed to initiate the global pilot with the first SUNARK in Mauritius in June 2015, when Deputy Prime Minister Duval of Mauritius takes over the presidency of the Indian Ocean Vanilla Islands Regional Organization from Madagascar.